Today Maddy headed back to the Columbus Zoo to spend some more time riding the fun rides.  After spending a few hours on the swings, frog hopper, and carousel we decided to have lunch.

Instead of eating at the Zoo, Grandma decided to take Maddy to a restaurant she had never been to…The Melting Pot.  I was a little skeptical of how she would like things, but I was excited to be going to the Melting Pot too!

Maddy loved it.  She was able to have blue cooking tools which made her very happy!  She enjoyed bread, chips, salad, filet, chimicurri beef, and then her favorite course…chocolate desert!

After lunch it was time to spend some time in the pool.  Maddy made sure to get extra wrinkly before she was done swimming.

After swimming and dinner Maddy enjoyed some time by the fire pit. 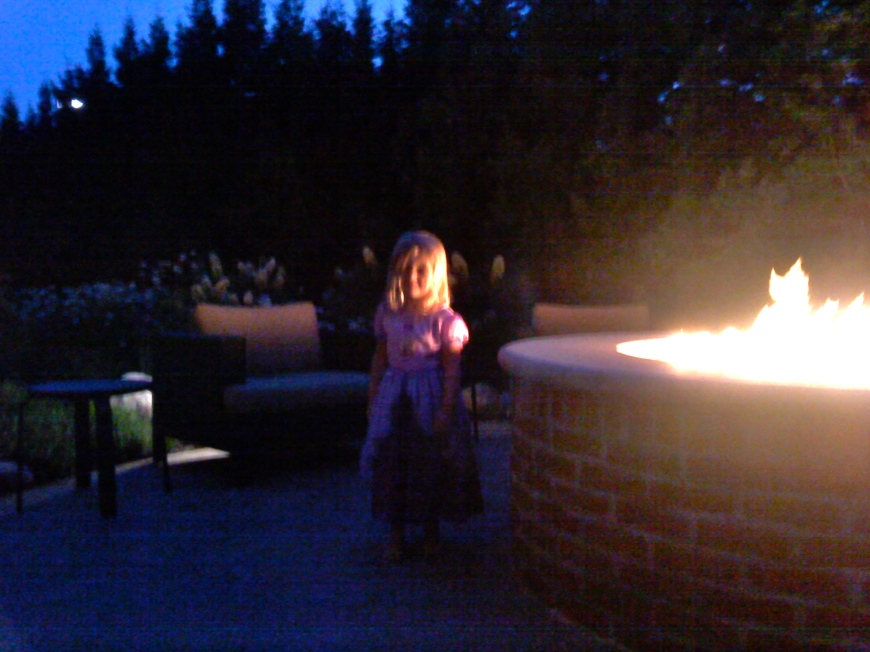 Tomorrow we are heading back to Akron to begin working on the preparations for Pandamania! So until next time…

We had a full day at the Columbus Zoo today!  Maddy’s favorite part of the zoo was the small amusement park.  Since it is not the norm at home I snapped some photos of her enjoying herself in this part of the park.

We enjoyed dinner at Brio.  There Maddy discovered another food she likes to eat…calamari. 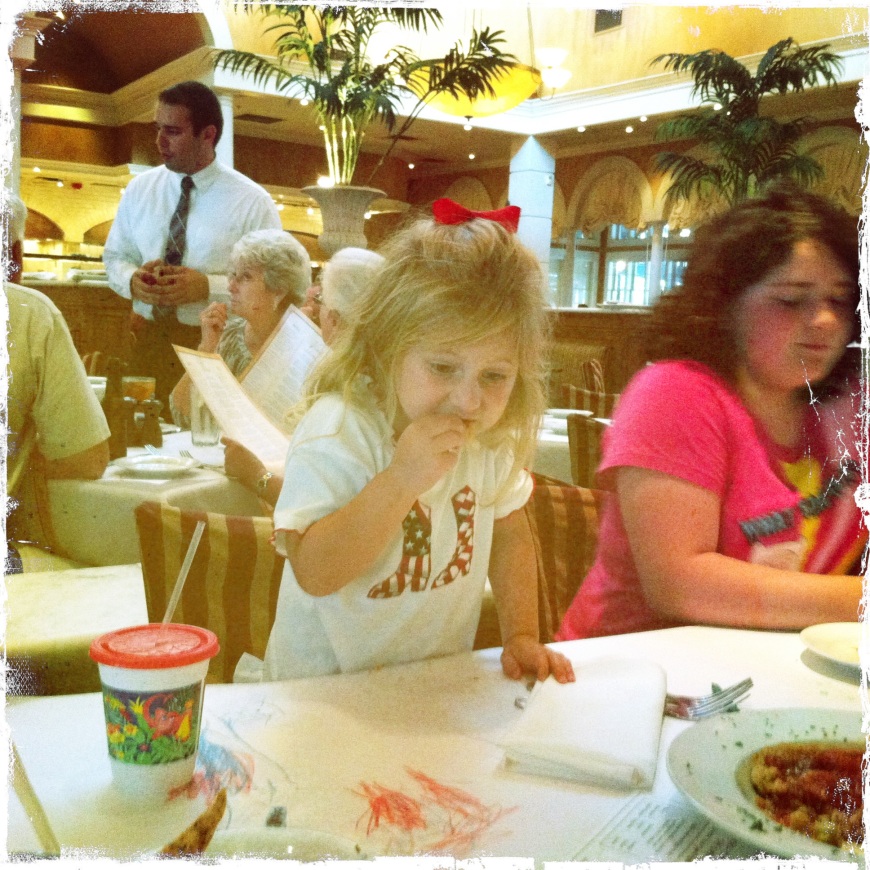 I’m not sure what is in store for tomorrow, but I’m sure it will be tons of fun!

So there are lots of titles that I could have for this post, but we’ll just stick to the first one and I’ll subtitle a few things.  Maddy is feeling a lot better the antibiotic seems to be kicking whatever bug has lived insider her for the past week out.  I’m happy because today we headed for Columbus for a few fun-filled days before the chaos of SKS tears through our house.

In fact, Maddy is feeling so much better that I couldn’t get a picture of her today.  She would not stand still.  So her is a photo of her new ankle bracelet that I was able to snap quickly. 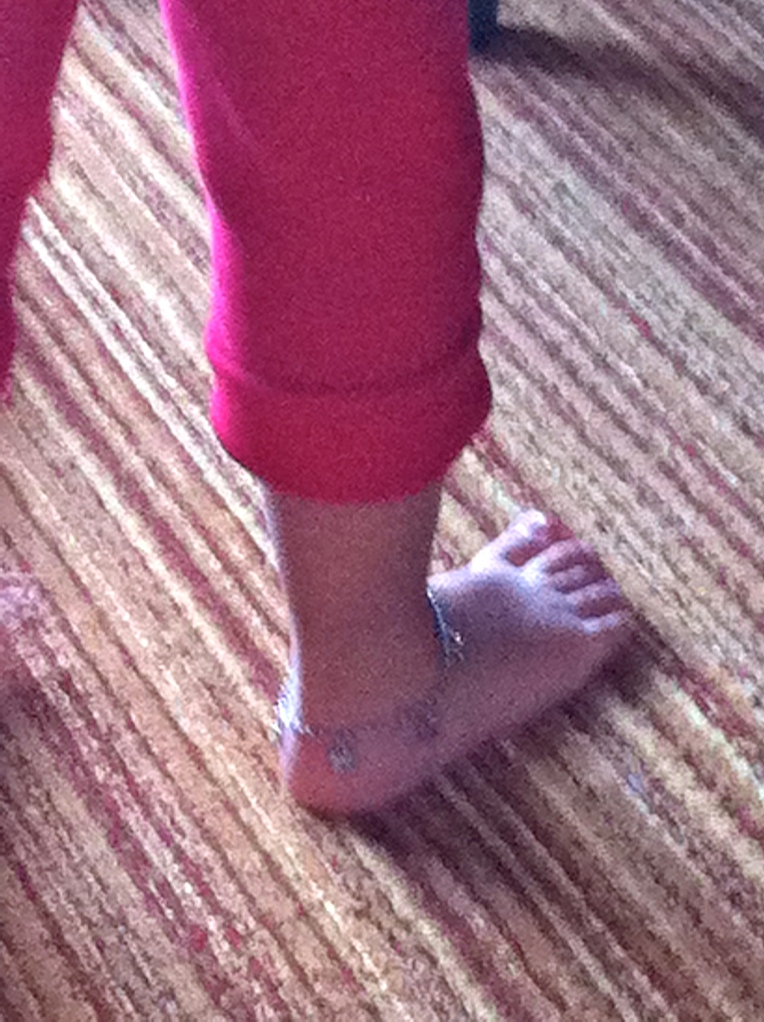 Why My Mother Will Never Again Go to the Easton Target:

There was a small incident tonight at Target with Maddy, Grandma, and Grandpa. They had headed to the Target to get some things they had forgotten for the trip and while they were there Maddy had a coughing fit.  Let’s just say that everything she had eaten in the last six hours blanketed at least six aisles of the Target.  Grandpa, who has the weakest stomach of anyone on the planet, promptly ran the other direction to avoid an even larger cleanup in aisles seven through fourteen.  He did let a worker know that there was a mess back there, but he didn’t stop too long because sometimes even talking about vomit will make the man vomit.

Anyway, Grandma rushed Maddy to the Target bathroom, stripped her, threw her clothes in the garbage, and fashioned her a paper towel dress (I’m sure it will hit the runways of Milan in the fall) all before running through the checkout.  Ironically the one thing that the Target cashier forgot to put in the bag was the soap.  I’m not sure if she was just taken aback by the awesomeness of Maddy’s paper towel dress or the woman paying for all of the merchandise covered in vomit…

Fortunately, Grandma and Maddy were able to get back to the hotel quickly and shower off the funk.  Promptly after returning Maddy refilled her body with M&M’s and Doritos.  Right now she is passed out next to me and I a hopeful that the next coughing fit will not yield as much as the last.

What Aaron Has Been Eating:

So where was I during the Target Vomit Incident of 7/3/11?  I was at the Cheesecake Factory enjoying dinner.  Let’s just say that if I were at the Target during the episode we might just still be there weeping…I have my father’s stomach.  Fortunately for me, Grandma and Grandpa told us to go to dinner.

Here’s a picture of Aaron with his chicken slider dinner.

Aaron has definitely eating his way through vacation.  Here he is enjoying the Monster Cookie I brought him from Rocky Mountain Chocolate Factory.  If I was a cookie I would be scared…

Tomorrow we’re planning a trip to the Columbus Zoo!  So hopefully i will have more to share, and here’s hoping it is a little less eventful for Grandma and Maddy.

Happy Friday!  Before we talk about Maddy today I must first say Happy Anniversary to my wonderful Mom and Dad who have been married for thirty-three years.

Today was a mild, sunny day so we took advantage of the sunshine and low humidity to get some yard work done.  Mulch was laid in the front yard, trees and hedges were trimmed, gutters were cleaned, and vegetables were planted.  Don’t worry Michael, I’m still using the pots and tomato tree – no grass was uprooted in the making of our garden.

Greetings from sick world!  Maddy is still fighting something, and today we decided to throw in the towel and just call the doctor.  We have a tentative diagnosis of try to give her Benadryll tonight and see if it works, but he was kind enough to give us a prescription for an antibiotic if she is not feeling better in the next day.  I’m happy that he isn’t making us come back in for a follow up before giving us an antibiotic.  Thanks doc!

After her appointment, Maddy was feeling good enough for a McDonald’s lunch with Grandma Johnston.  She decided that her salad lid would make a good steering wheel. 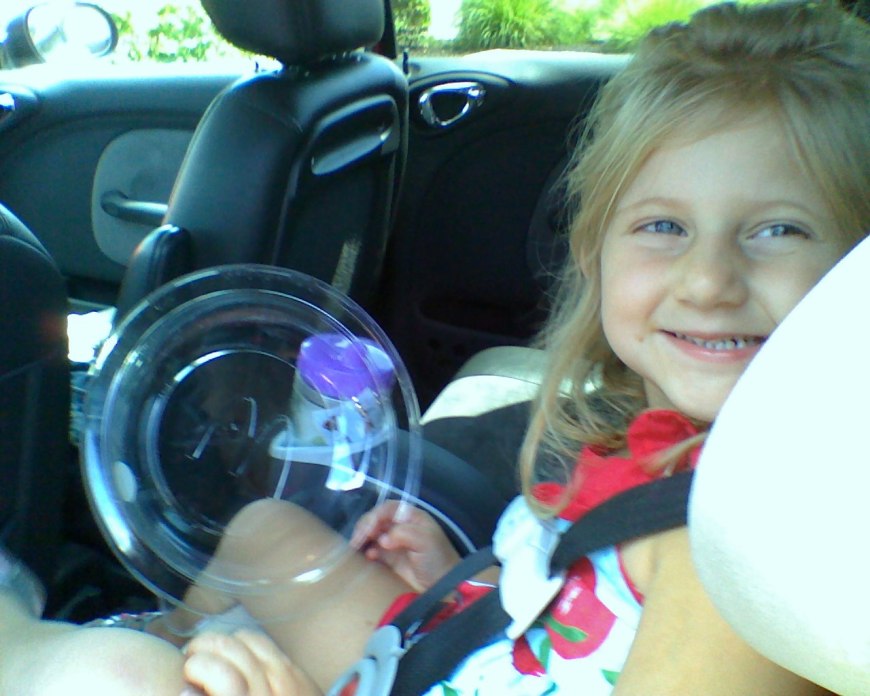 Other than the doctor’s visit today has just been another day of Maddy on the mend.  I did spend some time at the hospital visiting Pap who has been downgraded to a regular room.  Unfortunately for him there are no available beds in the hospital so he is stuck in ICU…he’s trying to be in good spirits about it, but would you want to be in ICU when you don’t have to be?